You are here: Home / The Burren / Built & Cultural Heritage / History

As with the archaeology of the region, in attempting to uncover the evolution of society in the Burren over the last two millennia, there is a very rich and relatively intact built heritage, including over 500 ring forts (mostly stone ‘cahers’), ecclesiastical sites (thought to be the densest concentration in Ireland), Tower Houses, thousands of miles of stone walls, and a fascinating array of farming structures.

This record in stone is supplemented by a strong written record, dating back as far as the Annals of the Four Masters which recorded information from as far back as the early Christian Period, and including the superb record of Hely Dutton and his Agricultural Census of County Clare in 1808. 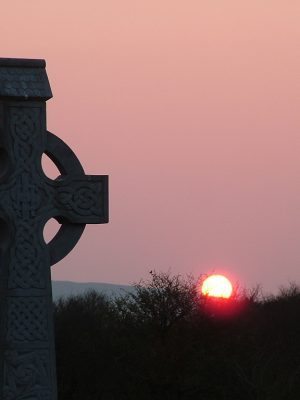 At the beginning of the Early Christian Period (c. 500 AD) agriculture began to recover strongly from the lull it had experienced over the previous millennium of the Iron Age.

Agriculture at this time would have been boosted by the introduction of new technologies, particularly those relating to crop husbandry and milk processing. New crop species, tools and cultivation techniques were probably introduced to the Burren by monastic settlements such as those at Oughtmama and Corcomroe.

Significant advances in dairying were also taking place, with the advent of milk processing in the form of cheese and butter cows could provide year round sustenance. To protect these highly coveted animals from marauding wolves and raiding parties, ring forts or cahers were built – over 500 in the Burren alone.  These Early Christian farmsteads again noticeably favour the Burren uplands in terms of location, though a number of earthen forts or ‘raths’ are also found in adjacent lowland areas.

It is interesting to note that many early monastic sites in the Burren, such as Oughtmama (c.1000AD) and Corcomroe (c. 1200AD), were strategically located between upland and lowland areas, reflecting the dual requirements of the mixed farm economy – grazing and tillage – of this time. It was only during this Early Christian period that lowland areas in the Burren began to be seriously exploited, most likely to meet the needs of tillage production that the uplands could not provide.

The agricultural significance of the Burren in Medieval times is clearly reflected in the fact that over twenty tower houses are found in the region (and fifty others in the adjoining baronies of Corcomroe and Inchiquin), several of which feature walled ‘bawns’ built to protect livestock.

Many of these tower houses are located on the border of the Burren barony, leading historians to believe that they were built by the ruling O’Loughlin clan to defend the coveted winterage lands of the Burren. The famous Leamanagh castle represents a fine example, dating from 1490AD, situated on the shale-limestone interface at the southern edge of the Burren. Dunguaire castle, located where the limestone of the Burren dips into Galway bay, is another good example.

That the richness of the Burren in terms of its agricultural produce was of historic renown is attested to by the frequent raids to which the region was subjected in medieval times.

The plantations of the 17th century resulted in much the lands of the Burren being redistributed.

Following the plantations, sheep farming would appear to have attained prominence in the uplands, with vast flocks being kept by the main landowners, often on a year-round basis.

Considering the contemporary perspective of the Burren as an ecological, cultural and geological haven, it is interesting to note that, historically it was the agricultural quality of the Burren that took precedence and seemed to generate most interest among observers.

The enormous pressure on the land prior to the Famine, when 400 people per square mile lived in areas such as Fanore and the Ballyvaughan and Turlough valleys, resulted by all accounts in a desolate, barren landscape.

Following the famine, the pressure on this environment diminished notably through an enlargement in holdings, a decline in sheep numbers and a reduction in population. The dominance of cattle was reasserted in the post-Famine period, though sheep remained an important feature of upland grasslands.

It is interesting to reflect on the comments of Coulter (1852) who recorded that a ‘fuel famine’ existed at this time in the Burren, such was the rarity of scrub, or woodland, with ferns, brambles and the stringy stems of mountain avens collected for fuel. Such a situation is almost unimaginable in the Burren today, and reminds us of how rapidly landscapes can evolve, over just a few generations in this case.

This remarkable change in the landscape is a reflection of the fact that, following the ravages of the famine, human pressure on the Burren uplands has been diminishing from what would have been an unsustainable level of intensity. This relative lull in upland activity is reflected today, as it was historically, in the gradual reversion of many upland grassland and pavement areas to scrub, primarily hazel.

View here for more information on: